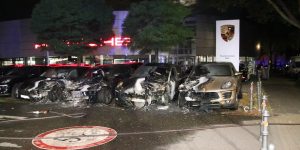 Four Porsche Cayenne SUVs at a dealership in the Ehrenfeld district of Cologne, Germany were set alight in the early hours of Monday.

The following is their communiqué:

June 17, 2019: Last night we torched four fresh off the assembly line premium class Porsche Cayennes (550 hp, 180000 Euros per vehicle) on the grounds of the Porsche Center in Cologne-Ehrenfeld. Every morning, countless 3.5 tonne cars each drive to unload 35 kilos of children in front of our school. This must come to an end! Let ‘End SUV’ be felt!

Our world is on fire! But they ignore us.

Maybe we can make them listen By burning down their SUVs.

1) The politics of adults urge us as a young movement to propose not only climate goals but also concrete measures to achieve them. On the other hand, we have long avoided this, because we believe that this task is not for us, but for the politicians and scientists to achieve these goals.

2) The adults also threaten to find our ‘commitment’ ‘just and important’ in order to embrace our movement and our concerns, so they can just ignore it as much as possible and render it conflict-free. But our concern does not tolerate any ignorance or any delays! This is not due to our ‘youthful’ impatience,’ but to the laws of man-made global warming. Your ‘attention’ to our concerns is therefore part of the problem and not part of the solution!

We want to consider these facts and propose some practical measures:

We urge you to destroy as many SUVs as possible (it doesn’t matter how: smash bricks into the interiors, scratch paintwork, break the windows, slash the tires, put expanding foam in the exhausts or just simply set them on fire). We want to use this concrete measure peacefully for the limiting of climate-damaging CO2 emissions. In other words, we will ensure that no person is injured while we render these vehicles harmless.

We have long debated at our school whether this measure is itself (beyond the intended political effect) harmful to the climate and have calculated that the premature destruction of an average SUV when replaced by a fuel-efficient small car, taking into account the energy costs for vehicle manufacturing as climate positive if the SUV had a life expectancy of at least another 4 years at the time of its destruction. Here we have also taken into account the (estimated) climate-damaging emissions during the torching of an SUV.

A further climatic success of this measure comes when there is an educational effect on the neighborhood and beyond. Therefore, we consider it extremely important to report on this concrete climate protection measure to the public (but of course anonymously!). To make the achievement of our goals socially acceptable, we propose to focus on the 50000 euros and above category of SUV.

With our first little action, we ask you to ignore their ‘embrace’ and their ever-equal rules of power.

Concrete action, now! Let the end of SUVs be felt!

Every Day and Night for Future