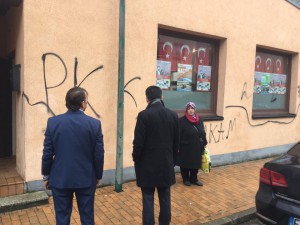 On December 10th, 2016 the ‘German Turkish Federation’ (ATF) organized a cultural day with the slogan ‘Feast of the Flags’ in the Neumünster town hall. The ‘ATF’ is the umbrella organization of the ‘Gray Wolves’ and represents the fascist nationalist MHP party in Germany. It is a scandal that the city of Neumünster allows its premises to be used by fascist organizations who openly display their fascist-nationalist ideology. The flags with the three crescents were openly on display, the ‘Gray Wolves’ hand signal was openly used and fascist literature was sold.

The ‘Turkish Federation’ is responsible not only for propaganda work in the FRG to spread its fascist agitation but is also closely linked to the MHP party in Turkey. The fascists played a decisive role in the massacres in Cizre, Sur and many other regions while the fascist forces within the Turkish army are currently participating in the invasion of Bakur and Rojava. The MHP is working with the AKP on the reintroduction of the death penalty in Turkey. Their objective is the murder of Serok APO (Abdullah Öcalan) by the Turkish state.

In protest against the fascist event we simultaneously attacked the ATF building on Joachim street with graffiti and sabotaged several cars of the participants.

We will attack you wherever you are.