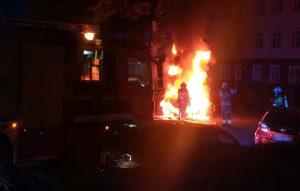 Vonovia Remains Undesirable
Europe’s largest listed property group Vonovia once again increased its profit in 2018. The Bochum-based DAX30 company was able to increase its profit to 1.07 billion euros. This means that of one euro’s rental income, approx. 38 cents, IE more than one third, will flow to the shareholders. Vonovia has thus succeeded in optimizing the entire profit segment. But who pays these enormous profits of the company?

It is no big secret nor is it surprising news that they are generated at the expense of tenants. Through questionable settlements, repairs, upgrades and the resulting rent increases, Vonovia succeeds in generating more and more money and then distributes it to its shareholders.

Vonovia is the largest but by no means the only rental company in Germany to be attacked for their questionable methods. The “Deutsche Wohnen” and the “CG Group” are just two examples.

Through consistent gentrification, people are driven out by real estate companies and whole neighborhoods are destroyed. Profits rise just as consistently as our rents, but in cities like Hamburg, Berlin, Leipzig or Dresden, where the rental price only knows one direction and apartments are scarce, many people cannot escape this coercion and exploitation. It leads to repression and homelessness. Only the market and the large corporations that play in it win.

That is why we fight, not just for ourselves, not only for our hatred of the capitalist system and such companies but for everyone who is exploited and at whose cost billions in profits are made.

For these reasons we set a Vonovia van on fire in Dresden on Tuesday night. To show Vonovia, the city and everyone else, we are still here and we are still continuing to fight.

Unfortunately the fire did not also damage the other Vonovia vehicles that were nearby but we will learn from it.

With this action we also send greetings of solidarity to all who fight for a liberated society and against repressive structures.

Greetings to the Park Bench 3.
For you.
For (A)ll.